Why I Want My Son To Play Kitchen-Kitchen

A few months back, my son got the chance to play with a cute little girl, Manashvi. Manashvi is the daughter of one of my husband’s good friends. We three, my husband, our son and I, went to Manashvi’s house for a single day friendly stay. Manashvi has a kitchen set which is basically a pretend play set and both, Manashvi and my son, spent the maximum of their time in playing kitchen-kitchen.

It was such a fun to see my 3-year-old son giving teas to us, the parents, and saying “Aap ke liye banai hai maine..” (I made it especially for you.)

Then during my Dhanteras (pre-Diwali) shopping, I happened to buy a kitchen pretend play set for my son also. I knew he loves it. As I showed it to my boy, his eyes gleamed and the sheer happiness that I found on her face is unexplainable. Since then, kitchen set is his favourite and every day he plays with it. For the first time when my husband found our son arranging the kiddie utensils of his kitchen set, he laughed and commented “Feminist son of the Feminist mother.” His comment really made me think for a while.

I never intentionally tried to raise a Feminist in my house. Although I want my son to understand the importance of other genders, I had no special plans in my mind to make my ward a Feminist. Rather, I always want him to be a self-sufficient person. I have seen two men in my life very closely; my father and my husband. Both of them are caring and supportive to their wife. Still, I feel some scope for improvement in their dynamism as they both dislike cooking.

My father never cooked in his life, nor he ever tried to learn it. His kitchen visit was limited to making morning tea for himself as he wakes up really early. As his gesture of love, he always made the first tea of the day himself rather than asking my mother to make it. I really admire this habit. This is such a gift for a wife to have a cup of tea made by his husband. Howbeit, one and half years back, my mother suffered severe anaemia. Her condition was really critical and it took almost a year to diagnose the cause of anaemia. She was on the bed, even unable to go bathroom alone. And as she got bedridden, the responsibility of kitchen, unfortunately, was in hands of my father. I mentioned, unfortunately, because they couldn’t find a cook or someone who can cook three meals for them.

I and my younger sister, both married and settled in different cities, tried our best to convince our relatives to help our parents. But no one stayed for more than a week. It took almost three months to figure out an alternate option. Eventually, my sister went to our parents and took everything in her hands. During this time, one thing that my parents and I along with sister realized that if my father would have learned to cook, he could have managed the plot for some time. They could have avoided having Dalia and bread every day. Outside food was strict no and the processed food they both hate.

Likewise, my husband never likes cooking. He is raised in such a way. Being a man of the 21st century, he understands the need of cooking skills, still, he is reluctant towards practising it. He prefers ordering food from outside rather than trying his hand in cooking something as simple as Khichdi. I am all fine with it. I also love outside food and I get a wide smile on my face when he asks “Batao kya order karna hai..” (Tell me, what you want me to order). However, I know, somewhere down the line, I would get old. I would not be able to consume outside-food and would prefer the home-cooked meal. If I am unwell, I would need someone who can cook for me and then if I face a situation like my parents did, who would cook for me?

That’s why I want my son to learn all kitchen skills along with other life skills. I appreciate my boy’s all those plays when he prepares a virtual tea for me. My heart really feels proud when he offers me a non-existent Daal Chawal in those tiny kitchen set plates. This is the first step to make him realize the importance of cooking. Also, this would ultimately break the stereotype that kitchen is only for women. I know this is the goal of Feminism too to break such stereotypes. But this is not being Feminist, this is being self-aware, self-sufficient and family caring. Cooking is love for yourself and for your family. Women are doing this since ages and I want my son to understand the fact that cooking is a skill. It brings health benefits, culinary benefits, financial benefits and social benefits also. All Men Should Learn to Cook.

The other day, my boy was chatting with his father and suddenly said: “Mumma is the Chef.” I guess he is going in the right direction. Chef is the better word to represent the cooking skill. 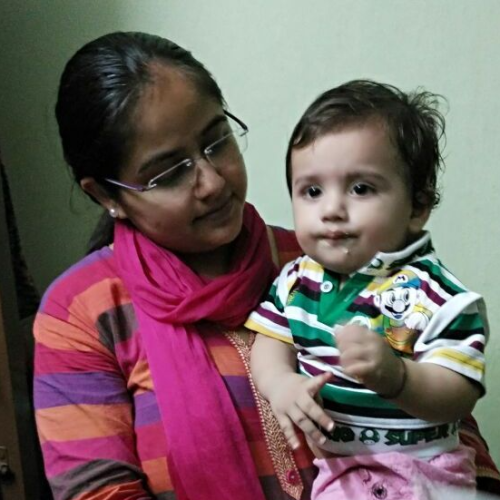 Shipra Trivedi
Software professional having 9+ years of experience in her domain. Writing is her hobby and for pursuing it other than her work, She runs her own blog with the name "Vibhu & Me"(http://www.vibhuandme.com/). Vibhu is her son's name who is the biggest inspiration behind her writing. She also writes for a few parenting and social websites. Most of her blogs talk about her own parenting experiences, social issues and health awareness.
RELATED ARTICLES
Baby